TTL 20: “The Departure of Merlin.” — by David Russell Mosley

Here is Post #20 in the Series on Taliessin through Logres! Please visit the INTRODUCTION to this series first, and here is the INDEX to the other posts in the series. 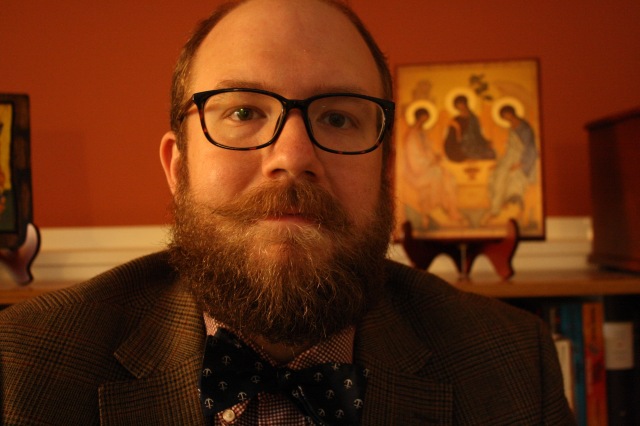 David Russell Mosley blogs at Letters from the Edge of Elfland. He has a PhD in theology from the University of Nottingham in the United Kingdom, and currently teaches theology part-time for Johnson University. Mosley is the author of the forthcoming books, On the Edge of Elfland, a faërie romance that will be published by Wipf and Stock publishers sometime this year, and Being Deified: Poetry and Fantasy on the Path to God which will be published by Fortress Press sometime this year.

Here is Dr. Mosley reading “The Departure of Merlin”:

All is right with the world. Galahad, the man with a trinity of mothers and, possibly, fathers, has taken his rightful place in the Siege Perilous. The heart of mankind, in the Pope’s hands (which are the vicarious hands of Christ), beats as a lover’s heart does beat in the presence of his beloved. The heretics flee from Byzantium and the Table is taken into Broceliande. Merlin has set all to rights, and so he may now depart, or so it seems.

“The Beguiling of Merlin” by Edward Burne-Jones

I make no claim to be an expert on Charles Williams or even Arthuriana (although I know more about the latter than the former). Nevertheless, there are several things of note in this poem about the departure of Merlin that I have noticed and desire to share with you. As I said in the beginning, what we have in this poem is a Merlin whose work is done. It seems Logres has no more need of him, Palomides is a Christian, and Galahad has come (and possibly even brought the Grail). The timeline here is admittedly (as it is throughout the work) confusing.

Sørina in her introduction to Taliessin through Logres suggests that the placement of this poem indicates it takes place after the events in the poems preceding it; however, the poem itself seems to at least possibly suggest that Merlin’s departure comes after he has born Galahad to Almesbury and to his second of three mothers, Blanchefleur. The confusion, for me, stems from how we are meant to understand this stanza:

The joyous moon waxes in the chair;
the blessed young sorcerer, a boy and less than a boy,
rose and ran, turning on the roads; he span
into the heart’s simultaneity of repose.

Who is this joyous moon? The moon itself would suggest Galahad (who was delivered “to a moon of white nuns”). If I am right and the moon is Galahad, further evidenced by the mention of the chair, for Galahad is the rightful owner of the Siege Perilous (the seat chosen by Merlin for the one who would achieve the Grail Quest), then it is possible to read this as saying both that Merlin’s departure comes after his deliverance of Galahad or after Galahad’s waxing. To further confuse matters are the other three verses of this stanza. Who is the young sorcerer? At first we might think Galahad, after all the first verse is about him, but Galahad is not a sorcerer and is not, yet, going to his repose. It is Merlin, not Galahad, who is departing. I think my reading is correct based on the next stanza:

Joseph of Nazareth, Joseph of Arimathea,
came dancing through the coeval-rooted world’s idea.
They saw Merlin descending: they met him in the wood,
foster-fathers of beatitude to the foster-father of Galahad;

So at some point after Galahad is delivered to his first foster-mother (his second being Guinevere and his actual mother being Helayne), Merlin departs into the wood, presumably Broceliande, and there he meets, dancing, the two Josephs of the New Testament. Here Williams does something that I find very interesting. He considers the two Josephs as foster-fathers, in different senses, of Christ (thereby giving Christ a trinity of fathers: the Father, Joseph of Nazareth, and Joseph of Arimathea). He then uses this to connect Merlin to these men as the foster-father of Galahad. This is interesting because Williams is now setting up some kind of connection between Galahad and Christ and it is this I want to primarily examine now.

It seems to me one could almost argue that Taliessin through Logres is about Galahad and his father Lancelot more than it is about anything else. It is not even a grail quest since we never properly see the grail in any one poem (perhaps intentional on Williams’ part so that it leaves us with the Quest, that we must seek out the Grail). As you read through the book, you find Lancelot several times ending an individual poem, as well as being part of the focus of the book overall. Lancelot signals the beginning of Camelot and Arthur’s rule in Logres in “The Calling of Arthur.” He signals its fall in “The Star of Percivale” when he looks to the Host and sees not Christ but Guinevere (though he is not alone at fault since Arthur sees naught but himself). And yet Lancelot performs a meaningful mass, that will be discussed later, at the very end. 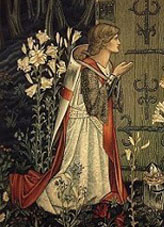 Galahad too plays his part, but Galahad’s part, as the poem would argue, is the ennobling of Logres, the undoing of the sins of his father, Lancelot, and his foster-father, Arthur. Galahad’s coming does not signal the renewal of Logres as Merlin knew it:
Moons and suns that rose in rites and runes
are come away from sequence, from rules of magic;
here all is cause and all effect; the laws
of Merlin’s boyhood are unknown in Nimue’s wood.

Instead, Galahad’s actions function as a kind of transfiguration, not only of the ever dwindling Logres, which ultimate rescinds into Carbonek in Broceliande, but of Broceliande, which I think we can equate with Faërie itself, as well.

We see this as “The Departure of Merlin” comes to a close. Merlin is wandering in the woods, which I assume are the woods of Broceliande since they are called Nimuë’s wood, and he is seen by some “I,” presumably Taliessin. This I who sees Merlin in the wood then sees into P’o-Lu: a realm of anarchy headed by a headless emperor. It seems, to me at least, that Broceliande is come to P’o-Lu. The headless emperor fades, and the trees over cover the volcanic waters of this hellish place. For some reason, I don’t yet understand fully, this terrifies at least one sailor with the I, causing this sailor to jump overboard, “to the wreck of wisdom, the drowned last of love.” Perhaps the sailor is confused and believes that P’o-Lu has overcome Broceliande. Perhaps he despairs that Broceliande is withdrawing from the parts known into parts unknown. I’m not sure. What I do know is that this vision, along with a wind from Broceliande itself, sends the sailors to Byzantium.
After the strange scene we return, I believe, to Logres, to Logres withdrawing. The Table has, it seems (and this will be made more clear, though only slightly, in “Taliessin at Lancelot’s Mass”) been withdrawn into Broceliande. Nimuë draws “all natural becoming to her shape of immortal being.” Merlin, I think, is part of this, he too is drawn in to receive his repose and to become, I think, identified with time itself. Throughout the book Merlin’s age seems uncertain (though not in a T.H. White kind of way). Merlin, it seems exists almost outside of time, or better, is time. This I see in the final stanza: Merlin is done, so the stanza tells us, and has done well, for the “moon,” Galahad, Lancelot’s son, “waxes and wanes in the perilous chair.” Yet the last line tells us that Galahad is not only in his proper place, the siege perilous, nor that he is the son of Lancelot, but that he is “time’s foster-child.” Unless Williams is giving us a fourth father to Galahad (Lancelot, Merlin, Arthur, and Time), it would seem that Merlin can now, if not before as well, be identified with time itself, making the Christlikeness of Galahad clearer still since he too came at the appointed time. And it is this appointed time that sees Logres handed over to Galahad, even as it slowly withdraws, as he receives it from his three fathers, Lancelot, Merlin/Time, and Arthur.

7 Responses to TTL 20: “The Departure of Merlin.” — by David Russell Mosley