Problems with “Heroes and Kings”

At the end of yesterday’ post, I wrote about how lovely these poems are, and about how CW moves beyond traditionally questionable scenes into making artistic inspiration the purpose of the characters’ interactions. I could leave the discussion there, letting the beauty of the verse, and its traditional form, speak for themselves. I don’t have to venture into the academically questionable waters of biographical criticism and reader-response.

But this is a blog, not an academic paper, and I want to voice my opinions of CW’s writings here, and I beg you to do the same. We have had some lovely, lively debates on a few previous posts (especially this one), and perhaps today’s will arouse more of the same.

If I knew nothing about CW’s life, I would still be a little put off by these poems. Let’s focus on “Tristram’s Song to Iseult” and “Lamorack’s Song to Morgause.” Specifically, I am uncomfortable with three things: the S&M content, the objectification of the women, and the adultery.

Let’s take those in reverse order.

Do you know the story of Tristan and Isolde? Here is one good synopsis of the tale. So in this poem, Tristram and Iseult have fled into the woods together. A lesser writer than CW, or one less steeped in hermetic tradition, would simply have written of the sexual consummation of their love. Yet here, they do not sleep together. He uses her body and his words to create a work of art that is, arguable, on a higher sexual plane than intercourse. And then Tristram presents Iseult to her husband at the end. So it is not adultery in the plain sense—but, guys, would you seriously want another man stripping your fiancée naked and drawing pictures all over her flesh?

The plot of “Lamoracke’s Song to Morgause” is similar; he has long indulged an unrequited passion for her, the wife of King Lot of Orkney. In this poem, he fights with her, ties her up, strips her, and binds her to a bed. But again: he does not sleep with her. He sings a song to her. So I cannot call it adultery in the most obvious meaning of those words. Yet she is married to another man, so the spirit of the laws of marital fidelity would prohibit deep emotional attachment to someone who is not your spouse, being naked with that person, and making that person the object of a romantic-sexual energy, whether fully expressed or not. In other words, there is certainly emotional adultery in these poems, along with what I would call literary and aesthetic adultery: making someone other than one’s spouse one’s Muse, the focal point of one’s art.

And CW himself committed emotional, literary, and aesthetic adultery with Phyllis Jones and a few other women during his lifetime. He made Phyllis his muse. He devoted most of his literary energies to her for at least a decade. And he used other women as means of arousing and channeling his sexual energies into art, although apparently he never had sex with anyone other than his wife.

In “Tristram’s Song,” there is no mention of whether the lady has any say in this artistic-sexual “play” for which her skin is the canvas. She is certainly the object in the most literal sense: she is the thing, the paper, the material, on which he makes his art. This is a troubling kind of objectification even if it were consensual.

In “Lamoracke’s Song,” the woman absolutely does not give her permission for their interactions; she actively, physically fights him off. “She contended, with white hands,” she prayed “to be released again,” “high she thwarted all attack,” she “kept her battle overlong,” “she broke wrists out of my grasp, / my hand she wrested from her arm, / and her lithe body from my clasp–/ behold, her potency was past, ankles and wrists were corded fast,” and so on, and on, and on. Now, I don’t know, and I don’t want to know: I suppose some kind of mock-resistance might be part of this kind of role-playing game—but there is no indication of that being the case in this poem. All the evidence is that she is seriously, sincerely trying to fight him off, and he overpowers her and forces her to his will. That makes this encounter, then, a kind of rape, even though it was not sexually consummated. She was stripped, bound, and tied down against her will. That’s evil right there.

In CW’s other writings, even his works on Romantic Theology, there is a disturbing tendency to make the man the subject and the woman the object of the theological process: he is the one on the way to heaven, she is one of the rungs on the ladder he climbs up. Now, CW was careful to mention that this could certainly go the other way: a woman could be the subject and the man the object, or it could be a non-sexual relationship between two people of the same gender—but he does not develop that idea. Anywhere he expands upon or plays out his Romantic Theology, it is always a man using the woman to achieve his ends. I can think of only one possible exception right now (please do tell me if you can think of others): in The Place of the Lion, Anthony is part of the means of Damaris’s salvation. Yet even there, he is clearly the “subject” of the story; part of the purpose of her salvation is so that she would submit to his persistent demands for her love.

So although I love CW and his works deeply, I see him as perpetuating the “Western” crime of putting men in the subject-position and women in the object-position. It’s a shame. 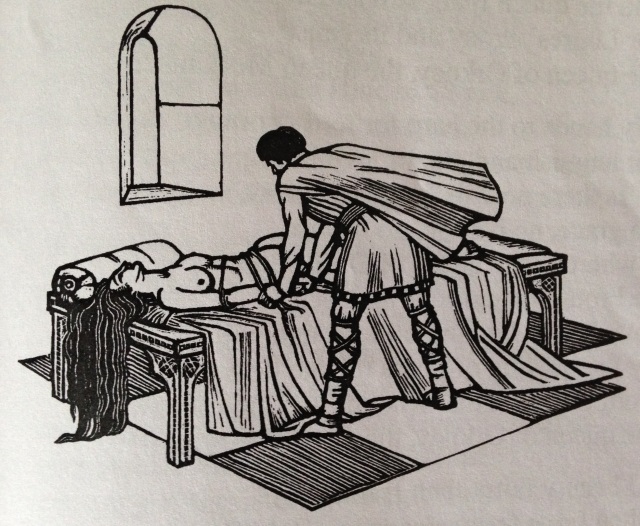 Now, come on, Higgins, don’t be such a prude. It’s poetry! It’s fiction. Literature brings sin to life all the time; that’s part of its point! Where would the human race be without the murders of Macbeth, the adultery of Anna Karenina, the miserly hatred of Scrooge, the bestiality of the boys in Lord of the Flies? Now, this poem goes on to praise the sinful actions, calling it “The glorious work,” but of course literature does that all the time. We have to keep our analytical eyes open, our critical thinking caps on, at all times.

I suppose I am more troubled because I know that CW himself, a self-styled Christian teacher and mentor, practiced behaviors like these in his personal life. I He worked hard in all of his writings to find out the “deeper meaning” of the bodies of the women he loved, trying to assign significance to each bone, joint, and fleshly part. OK, but this lead him into areas of strange, unhealthy experimentation. He wrote words on Lois Lang-Sims’ arms. He hit her on the palms and on the buttocks with a ruler. He made Joan Wallis bend over while he stroked her backside with a ceremonial sword.

In other words, his own actual sinful behaviors are embodied in this poem.

Does that matter? Does the author’s personal life influence the way we read a work?

Well, that’s rather the question. It’s one of the big theoretical questions of literary scholars and teachers for the last century, at least. So, shall we continue asking and debating it?

Sørina Higgins is a PhD student in English and Presidential Scholar at Baylor University. She also serves as Chair of the Language and Literature Department at Signum University, online. Her latest publication is an academic essay collection on "The Inklings and King Arthur" (Apocryphile Press, December 2017). Her interests include British Modernism, the Inklings, Arthuriana, theatre, and magic. She holds an M.A. from Middlebury College’s Bread Loaf School of English. Sørina blogs about British poet Charles Williams at The Oddest Inkling, wrote the introduction to a new edition of Williams’s "Taliessin through Logres" (Apocryphile, 2016), and edited Williams’s "The Chapel of the Thorn" (Apocryphile, 2014). As a creative writer, Sørina has published two books of poetry, "The Significance of Swans" (2007) and "Caduceus" (2012).
View all posts by Sørina Higgins →
This entry was posted in Book Summaries, Themes and tagged book summaries, poetry, problems, Romantic Theology, works. Bookmark the permalink.

22 Responses to Problems with “Heroes and Kings”