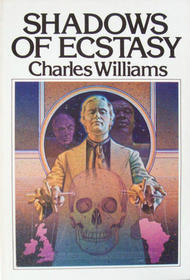 Behold CW’s 4th oddest book! After Witchcraft, Letters to Lalage, and Heroes and Kings comes Shadows of Ecstasy on my list of his strangest works. Yet with Shadows of Ecstasy, we edge nearer and nearer to his best works, and we begin our tour of my favorites: the novels.

Perhaps I should have summarized Shadows of Ecstasy earlier, before the whole “Amen House” period, since it appears that he finished writing it in 1926. But it wasn’t published until 1933, after four other novels had appeared; it rode on their coat-tails into the public square. And he rewrote it significantly in 1932, so we can consider it in the group of the early-1930s works.

What is it about? Well, as always with CW’s works, a bare plot summary suggests the strangeness and originality of his thought, but does not capture the profound lights, depths, shadows, and dances of his ideas. In short: it’s about POWER.

This novel is about Nigel Considine: a charismatic occult leader who has figured out how to live forever. The trick is that you take everything that would be an expenditure of energy—love, desire, lust, passion, hunger, anger, longing, envy, faith, ambition, etc—and turn it inward. Channel the energy inside yourself instead of spending it on sex, food, work, hobbies, or other people. This creates a kind of self-sustaining personal battery complete with battery charger: as if you could plug an engine into itself so that it would keep itself running forever without adding fuel. This has worked out nicely for Considine, who is a few hundred years old and looking quite well. He has spent time in Africa teaching his new “Gospel” there and is now leading both an educational tour and an invasion in England.

The plot follows several people in their responses to Considine: do they believe him, follow him, worship him, adore him, ignore him, repudiate him, or fight him? In this way, Considine serves as the central locus of the book’s motion, just as ritual objects do in all CW’s novels. Earlier he used the Crown of Thorns as the sacred object at the heart of a story. Later he would use the Holy Grail, a magical stone, the Tarot cards, and so forth. Each serves as the catalyst to reveal the characters’ true spiritual natures. So in Shadows of Ecstasy we get to know people’s true nature by how they respond to Considine.

Or do we? There are a few factors that make the “meaning” of this book very difficult to discern.

First, there is the cognitive dissonance set up between Considine’s “Gospel” and the true Gospel of Christianity. One character has to “decide whether he should turn out a fervent Christian or a submissive Considinian” (p. 112), and that seems to be the reader’s decision, too. Which one is a reader supposed to believe in this story? Considine is a charming, attractive, compelling figure. Is he meant to be the protagonist? Yet he has led hordes of African warriors to invade England, and drives them to die by the thousands. There is riot, murder, and mayhem. There is a horrific scene of our heroes in a car, driving over the bodies of fallen Africans. And through all this, the characters we love the most follow Considine with the passion of the newly-converted.

The second factor that makes this hard to decide is that all the best characters follow, love, or at least respect Considine. The narrative focuses a large part of its attention on Roger Ingram, a poetry professor. He sees in Considine’s teachings what he has always believed to be the real meaning behind the power of great verse. He is such an admirable character that his passionate love for Considine is very persuasive. Then there is his wife, Isabel, who is the submitted saint with mystical tranquility in this book. While she makes no decision about Considine herself, she supports her husband’s fanaticism whole-heartedly. Then there are others—a doctor named Sir Bernard Travers, an African king named Inkamasi—who feel a kind of intellectual or spiritual kinship with Considine even if they most oppose them. Only the Anglican priest, Ian Caithness, directly opposes Considine, both with religion and with the law. What is a good reader to do?

And the final question is the terrible ambiguity of the ending, which I will not spoil here. Suffice it to say that the reader is left with enormous questions about Considine’s nature, personality, leadership, and immortality. The characters are left in the same condition of uncertainty, some clinging to their faith that he has achieved an unending life on earth, and others think that he has been exposed as a fraud. The reader has to decide.

So what about CW? What is he doing in this book? Does Williams love Considine? Does he espouse his “Gospel”? The transference or sublimation of energy is very much like what CW may have learned in the Fellowship of the Rosy Cross or his other occult reading. Did he believe in all that, at this stage of his life? Was he torn between the occult and Christianity? Had he not yet reached his great stage of integration?

I will let you read it and decide. Please let me know your thoughts in the comments below.

Sørina Higgins is a PhD student in English and Presidential Scholar at Baylor University. She also serves as Chair of the Language and Literature Department at Signum University, online. Her latest publication is an academic essay collection on "The Inklings and King Arthur" (Apocryphile Press, December 2017). Her interests include British Modernism, the Inklings, Arthuriana, theatre, and magic. She holds an M.A. from Middlebury College’s Bread Loaf School of English. Sørina blogs about British poet Charles Williams at The Oddest Inkling, wrote the introduction to a new edition of Williams’s "Taliessin through Logres" (Apocryphile, 2016), and edited Williams’s "The Chapel of the Thorn" (Apocryphile, 2014). As a creative writer, Sørina has published two books of poetry, "The Significance of Swans" (2007) and "Caduceus" (2012).
View all posts by Sørina Higgins →
This entry was posted in Book Summaries and tagged book summaries, novels, works. Bookmark the permalink.

4 Responses to Let Us Live Forever: “Shadows of Ecstasy”