Time to Grow Up, Boy: Transitioning at Heroes and Kings

Hold on to your hats, dear readers: this book is in the top three WEIRDEST that CW ever wrote. (The other two weirdest, in my opinion, are Witchcraft and Letters to Lalage. Although Shadows of Ecstasy is also a strong contender.)

<This is also a good time for a disclaimer: the following post and the next two in this series contain some adult themes, and tomorrow’s has one image that you may find offensive–I do.> 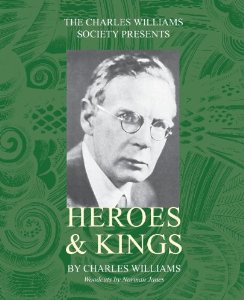 Heroes and Kings also marks a moment when we can start to see CW’s writing style change and his ideas go through a troubling transition before they mature. In fact, 1930-1933 is his transitional period, from the immature pre-Hopkins works to the mature ones that emerged after he edited Gerard Manley Hopkins’s poetry in 1933.

Think back over the works CW wrote before this time, and which I’ve already summarized on this blog. There were his unpublished ones: The Chapel of the Thorn, the Arthurian Commonplace Book, Outlines of Romantic Theology, and the “Poems to Celia.” There were the early volumes of (not-so-great) poetry: The Silver Stair, Poems of Conformity, Divorce, and Windows of Night. Then he caught a serious theatre bug, and wrote all those Masques of Amen House (along with some poems connected to them) and A Myth of Shakespeare. All his later ideas are present in those works, but by no means developed. His poetry was respectable, but not notable; indeed, it was quite old-fashioned. His plays were skillful, funny, and performable, but wouldn’t appeal to a very wide audience.

In a word, his pre-1930s stuff was all private. Of course, he wrote it with publication in mind, but it was all packed with personal, private references that people outside his own circle wouldn’t appreciate. Most of it requires a fair bit of biographical contextualization. And it isn’t really amazing literature. It’s good, and some of it is even great, but it is only his later works that [should] earn him a place among the lasting names in English Letters.

And he was in his forties. In 1930, he turned 44. And he hadn’t yet grown up as a writer. (I don’t know about you, but I find that encouraging. I’m a writer who has only published two little books of poetry and I’m now working on my first two novels; if he didn’t make it until his 40s, there’s a chance for me!)

And then died at age 58, after packing all of his greatest works into the last 15 years of his life. But that’s getting ahead of the story.

Heroes & Kings is a poetry collection that marks CW’s transitional period from juvenile into established writer. It also reveals the unstable state of his ideas at the time that he was leaving the Fellowship of the Rosy Cross and that the relationship with Phyllis Jones was falling apart.

This is a slender volume of only 19 poems. It contains 14 woodcut illustrations by engraver Norman Janes. Some of the poetry is the most beautiful he wrote to date. “Flint Castle,” for instance, is a lovely piece of blank verse that responds to Wordsworth’s “Tintern Abbey” by presenting a hermetic idea of the unity of the elements—“earth and air and water”—and that poetry is the unity that heals the schism. (I should also note that this edition, by Apocryphile Press, is sadly very poorly typeset and edited. It contains many, many shameful errors. But perhaps those were in the original? Maybe I will check someday, and work with the lovely folks at Apocryphile to produce a cleaned-up version. Or you do it! I’ve got too many projects as it is).

As the title suggests, these 19 poems are about legendary or mythic figures—but not the ones you might expect. Interestingly, most of them are women: Michal, Saul’s daughter (and also CW’s own wife); Queen Alexandra; Margaret, Queen of Navarre; a slave girl; Lilith and the Queen of Sheba; and a variety of Arthurian figures—Iseult, Morgause, Blanchfleur, and a Princess of Byzantion. Other heroes include Tristram, Palomides, Lamoracke, Percivale, Taliessin, Galahad, Robert Bridges, and Humphrey Milford.

Notice the significant Arthurian material. Indeed, the final 7 poems of this book are Arthurian, and are very much like rough drafts of the poems later included in Taliessin Through Logres (1938) and The Region of the Summer Stars (1944). Some can be almost mapped onto the later works (such as “Palomides’ Song of Iseult” with “The Coming of Palomides” and “A Song of Palomides” with “Palomides before his Christening”). This is, then an important work-book in which CW developed his ideas on the Arthurian legends that would later become his greatest works of Christian poetry. It is also fascinating to note that the poems are arranged in the book so that they grow from simpler, more restrained poetic forms to more lively, interesting rhythms. The poems at the end of the book are far, far better works of art than those at the beginning.

So What’s Wrong with It?

What’s the matter with this book, then? What makes it so weird? Well, there are several disturbing categories of content that I want to address one by one.

The racism in Heroes and Kings is of two kinds: historical/cultural, and incidental. The historical/cultural occurrences are to be expected in an Arthurian tale told by a middle-class Englishman hanging on to a Victorian heritage. One such comes in “The Song of the Deserted Thrall,” with references to “Tall Saracens and infidels.” In fact, an argument could be made that this is not racist at all, but merely an historically accurate reference to Islamic warriors. In his later works, CW would use Muslim characters with remarkable understanding and complexity, such as in Many Dimensions and the Taliessin poems.

The incidental occurrence is much more bewildering and troubling to me. It is in a poem disturbingly entitled “Jim Crow,” with the abominable refrain “jump, Jim Crow.” But the poem is, confusingly, not about a black man. It is about a nobleman, of apparently white English stock, with somewhat Christological or at least sacramental characteristics, who

…is the latest of a very ancient line,
his only food is biscuits and his only drink is wine,
and seven butlers wait on him when he sits down to dine.

In Norman Janes’ woodcarving, he is depicted as white:

In the story, he sets up seven maids with seven men for them to marry.

What in the world is going on here?

According to this site,

Throughout the 1830s and ‘40s, the white entertainer Thomas Dartmouth Rice (1808-1860) performed a popular song-and-dance act supposedly modeled after a slave. He named the character Jim Crow. Rice darkened his face, acted like a buffoon, and spoke with an exaggerated and distorted imitation of African American Vernacular English. In his Jim Crow persona, he also sang “Negro ditties” such as “Jump Jim Crow.” Rice was not the first white comic to perform in blackface, but he was the most popular of his time, touring both the United States and England. As a result of Rice’s success, “Jim Crow” became a common stage persona for white comedians’ blackface portrayals of African Americans.

Where and how Rice got it, or wrote it, is a mystery. Even before that, crow (n.) had been a derogatory term for a black man. Association with segregation dates from 1842, in reference to a railroad car for blacks.

OK. So that’s where CW got the term and the words to the song. But it doesn’t make any sense: his character is white and seems to have nothing to do with segregation or the deplorable American history of racial tensions.

But the Online Etymology Dictionary goes on:

Modern use as a type of racial discrimination is from 1943. In mid-19c., Jim Crow also could be a reference to someone’s change of (political) principles (from the “jump” in the song).

So that political, non-racial meaning is a possibility. In fact, CW could not have been using it as a racist term in 1930, if that usage dates to 1943. Is his poem political, then? The serving maids in the poem change their social positions: two marry gentlemen; one marries a prince. But there’s no indication that the “Jim Crow” of the title changes his political principles, or any other principles. In other words, I’m still confused.

That’s the end of Part 1. Come back tomorrow for sexism and eroticism, hermeticism and heresy!

Sørina Higgins is a PhD student in English and Presidential Scholar at Baylor University. She also serves as Chair of the Language and Literature Department at Signum University, online. Her latest publication is an academic essay collection on "The Inklings and King Arthur" (Apocryphile Press, December 2017). Her interests include British Modernism, the Inklings, Arthuriana, theatre, and magic. She holds an M.A. from Middlebury College’s Bread Loaf School of English. Sørina blogs about British poet Charles Williams at The Oddest Inkling, wrote the introduction to a new edition of Williams’s "Taliessin through Logres" (Apocryphile, 2016), and edited Williams’s "The Chapel of the Thorn" (Apocryphile, 2014). As a creative writer, Sørina has published two books of poetry, "The Significance of Swans" (2007) and "Caduceus" (2012).
View all posts by Sørina Higgins →
This entry was posted in Book Summaries and tagged book summaries, poetry, racism, themes, works. Bookmark the permalink.

7 Responses to Time to Grow Up, Boy: Transitioning at Heroes and Kings