TTL 11: “The Coming of Palomides.” — by Charles Huttar

Here is Post #11 in the Series on Taliessin through Logres! Please visit the INTRODUCTION to this series first, and here is the INDEX to the other posts in the series.

Charles Huttar is Professor of English Emeritus at Hope College.  He is co-editor of The Rhetoric of Vision: Essays on Charles Williams and the author of numerous essays on the Inklings, most recently “How Much Does That Hideous Strength Owe to Charles Williams?” (Sehnsucht 2015). When not writing he may be gardening or working KenKen.

Sir Palomides is a minor character in Malory, a valiant knight who appears in company—or competition—with many of the more familiar figures in the legends. In subsequent Arthurian retellings he is most memorably associated with his pursuit of the

Questing Beast and with the Mark-Tristram-Iseult triangle. Of the 32 published poems in Williams’s unfinished Arthurian cycle, three tell of Palomides’ journeys,[1] both literal (from Persia to Logres) and spiritual. In Williams’s account he is no slouch as a fighter—he has a tournament win to his credit[2]—but he is also a man of intellect and spiritual sensitivity, and this side of him interests Williams more. In fact, in this first poem his knightly prowess is practically ignored.

My comments here focus on the place Williams gives in his Arthurian myth to this enigmatic outsider; also, on the shape that he gives to Islam as a foil to other world-views. I claim no expertise in world religions, and those who say Williams was mistaken in one fact or another about Islam may well be right. It is, to be sure, no monolith. But in these poems at least,

Islam is a symbol, a piece in a diagram.[3] So long as it is generally in accord with the facts—not some wildly perverse image of the poet’s private devising—the kind of accuracy a poem requires is of a different order from, say, that for which a historian like Lawrence Wentworth has responsibility. After all, if Dante (as a man of his time) could deal with Islam in the Inferno as a Christian heresy, it makes a certain sense for CW in the medieval setting of this poem to reflect that tradition with broad brush-strokes. Insights he expressed in prose supplement what we find in these poems and contribute to a more rounded picture. From Many Dimensions and from his habitual use of the phrase “Under the Mercy” we sense his high regard for exemplary Islamic spirituality, intellect, and devoutness. 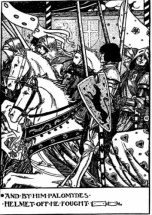 In today’s poem, news of King Arthur’s court has reached the Middle East and attracted a Persian prince to visit it and perhaps offer his knightly services to the company of the Round Table. Reared in the culture of his ancient homeland, a radical dualism that split the world between equal powers of Good and Evil, Spirit and Matter, he took his first step toward a more nuanced view through the teaching of the Prophet, Muhammad, who had himself been converted to a belief in “the One God.”[4] On the long journey to Logres he encounters several other forms of belief. Eventually, after a painful interlude of misdirection, at the end of the second poem he decides to become a Christian.

To Williams, this is clearly a step forward. My purpose here is neither to agree with this judgment nor to question it; rather, to describe the intellectual structure in which Williams arranges these various belief options. In “The Coming of Palomides” the knight is the speaker, telling of the world-views he has heard about or personally encountered in the intellectual and spiritual journey that makes up what we may call the first phase of his life.

Images from geometry structure the poem. His first teacher, source-hunters say, appears to be a ninth-century mathematician in Baghdad named Thabit ibn Qurrah, who translated Euclid, Archimedes, and other Greek authorities. Williams renames him, moves him back a few centuries, and has him teaching in central Persia, for the sake of symbolism. That he was historically a Muslim is irrelevant; what matters is his location in the land of Zoroastrian dualism, where Matter is rejected as Evil. (On Williams’s allegorical map, which famously superimposes anatomy on geography, Ispahan is the place of excretion.)  From “Talaat ibn Kura” Palomides learned “the measurement of man” as the Greeks understood it, for whom man was the measure of all things.

As he travels, Palomides encounters a spectrum of religious thought. First is Islam, which differs from his native religion in its radical monotheism but has the same contempt for Matter, exhibited now—the geometry this time is a curved line—in the deadly scimitar blade that separates “the Obeyed” (Allah) from “the Obedience” (humankind). “The awful otherness of Deity,” as Williams calls it elsewhere (Dove 43), prohibits any hint of the Incarnation that the Apostles and their successors taught. On that point Judaism agreed (but not until the third poem will we learn of Palomides’ exposure to that faith).

When he crosses the Pyrenees into France there are new geometrical figures—a second dimension as it were, two lines forming a cross, and yet a third dimension. “Gospels trigonometrical” enable measurement of “height,” and Palomides is faced with “God-in-man,” not just “man,” as the measure of all things. The root tri-, repeated in various forms later in the poem, suggests a still deeper “mystery” (line 23), that of the Trinity. It is probably here that he learns also of two more primitive kinds of belief, the old Celtic funerary rites (24-29) and the Goetic black “magic” of Etruscan sorcerers that proved powerless to “prevent” the establishment of first Roman and then Christian order on the very spot where they had worked their ”spells” (10-23).Palomides’ physical journey is also a spiritual search. He now has a menu of options, but all on the level of intellect. His will is not engaged; he is far from making a commitment.

We see him next dining at the Cornish court, a nominally Christian society that is represented, however, by persons far inferior in spiritual sensitivity  to “the uncrossed Saracen” (49):

Tristan and Iseult as depicted by Edmund Blair Leighton

a queen of great physical beauty and two “heavy . . . fighting lords” who have no interest in “the passion of substantial thought.” The poetry and music at which Palomides is skilled means to them only pleasant dinner-table entertainment (39-48). As to the Greek wisdom that he learned in Persia, they couldn’t care less, lost in “the unmathematic night / of  ignorance and indolence” (64-65).—whereas he  now has learned a higher wisdom. He is asked to sing; he sings, and his theme is not so much the queen’s beauty as his experience of the queen’s beauty. For it was the queen’s beauty that brought his new  recognition, not she herself but her mere physical presence, the curve of her bare arm which, being enfleshed, stood in stark contrast to the curve of a death-dealing blade and brought new life to the doctrines he had until then heard only abstractly. No longer can he cling to “religions that are afraid of matter and afraid of mystery.”[5] C. S. Lewis is right in calling it a “Beatrician” moment (125-26)—an image, drawn from Dante, that is prominent in Williams’s work. The sight has enflamed him with a “desire” not physical only, though no doubt there was that, but to renewed “thought,” inspired him “to measure the shape of man again” (lines 68-73, 35-38). From that point (line 75) on, the song is replete with geometrical imagery, triangles (especially equilateral) and other triplicities, together with images of fire, of journeying toward a higher mathematics that he has called “Euclidean love´(62, 98), and of “unions” (83) of things no longer to be considered irreconcilable. By implication, Palomides comes near to affirming the doctrines of Incarnation and Trinity.

There is a misstep. Not content with seeing, he asks the queen to give him her hand. The song ends abruptly, her arm displays anger instead of glory (103-4, 114-15), and the “sign” of a spiritual path flies out of reach (105-9, 119-20). “Relation vanished, though beauty stayed” (111). King Mark treats his princely guest like a hireling, giving a token payment for his minstrelsy. Palomides’ pride is cut to the quick. He had come so close to resolving what had been the quest of his journey, but all he can remember now of his options are images of death and ghostliness (122-28). He knows now that the different beliefs offered are incompatible; they call not for harmonizing but for choice. But now he is far from ready in his mind to make that choice. Instead, he lets himself be lured away by “the squeak of the questing beast,” the hope of finding a way, all on his own, to repair the disruption (130-32).

The second phase of his life is the subject of “Palomides before His Christening,” on which I plan to write on June 2.

4 Responses to TTL 11: “The Coming of Palomides.” — by Charles Huttar