CW Was a Socialist? Summary of “Judgement at Chelmsford” 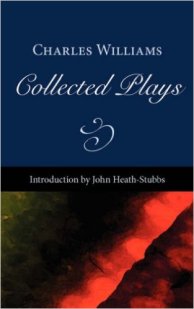 Judgement at Chelmsford is a pageant play, written for a church setting. The Diocese of Chelmsford was about to celebrate its 25th anniversary in 1939, and the theatre director Phyllis Potter, with whom Williams had worked before, commissioned him to write them a play. So he did, under his nom de plume “Peter Stanhope” (yes, the playwright from Descent Into Hell). He actually kept up something of a double existence, going under that name at rehearsals. Hadfield claims, in her usual confused way, that there CW had some kind of fight with his wife over the rehearsals of this play, but it is hard to tell from her nearly illiterate syntax what exactly the cause of the argument was (probably CW’s time commitment to the rehearsals and his emotional relationships with members of the cast) or how it was resolved.

In Judgement at Chelmsford, CW created a huge, sprawling drama about the history of Chelmsford. The play is a very long one, in 8 episodes with a prologue and an epilogue (93 pages in the original 1939 OUP publication; 85 pages in Collected Plays) and has an enormous cast and extremely complex staging, with music written by Martin Shaw 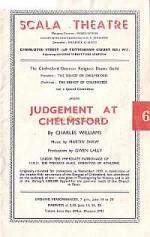 A programme for ‘Judgement at Chelmsford’ at the Scala Theatre on the 26th June 1947.

It was scheduled for performance at the Scala Theatre in London from 23 September to 7 October 1939, but “by 28 August, Phyllis Potter was making blackout curtains instead of costumes” (Hadfield 175). The outbreak of war on September 3rd prevented its being performed. Instead, it was published at the end of 1939 as a pamphlet by the OUP, under CW’s pseudonym Peter Stanhope. He sent copies to the members of the Order of the Coinherence, which had been founded almost simultaneously with the start of the War. Judgement at Chelmsford was eventually performed (after CW’s death) in June of 1947. (Programme courtesy www.arthurlloyd.co.uk; see the image on the right).

The premise of the play is that the Diocese, personified as a young woman, has been brought to Judgement Day on her birthday to see whether she will be allowed to enter heaven. An Accuser stands forth to show each of her works so that she may be judged. “If you were called to-night to be judged, how / could you answer?” She is asked, and The Accuser says:

I show fact
outward and inward. It is her business
if the facts of her history rise between her and you
to shut the gate of heaven in her face, and her fate
leaves her outside.

The Accuser is one of those ambiguous figures, like the Skeleton in Thomas Cranmer of Canterbury, who is, according to Hadfield, “not so much an actively malicious figure as the presentation of how evil things happen” (81). In this play, The Accuser is, apparently, each person’s desire revealed:

God made me to be the image of each man’s desire—
a king or a poet or a devil—and rarely Christ.
Most men when at last they see their desire,
fall to repentance—all have that chance.

And—spoiler alert—it turns out in the end that the Accuser is really Chelmsford’s Lover. He has been putting her through all this because it is good for her. Lovely, eh?

The play is in eight episodes:

“the complete pageant offers a representation not only of the history of the diocese, but of the movement of the soul of man in its journey from the things of this world to the heavenly city of Almighty God.”

This leads me to ask: Is it an allegory? I suppose it is, in a way. Chelmsford has to watch her past unfold on the stage before her, seeing what she has done right and what she has done wrong. Meanwhile, this is also what happens to an individual Christians: we are shown our lives in the light of eternity, and they don’t show up well at all. And yet, they are redeemed.

In another way, this play is about the healing of schisms. There are terrible divisions in the play: between those inside and those outside the church; between witches and witch-hunters (who is the real villain?); between martyrs and their executioners; between rich and poor, establishment and revolutionary. The contemporary opening of the play suggests that the audience themselves will soon be facing a horrible schism, as it begins to: “the sound of aeroplanes and bombs.” Remember, this was written in the summer BEFORE World War Two started, before the Blitz. Yet CW was prescient enough to know what would soon happen to his beloved London. It would be torn by bombs while his family was torn apart and his adored coworkers torn from their place and scattered. Grevel Lindop argues that CW is making a strong political point in favor of socialism in this play, making reference to Thaxted, the town whose well-known vicar was Conrad Noel, “the Red Vicar,” a famous Christian socialist. There is also a lot about “social justice” in this play, and a theme that we must take care of people’s bodies before we can take care of their souls, and that salvation is for this life as well as the next.

All of this had to be approved by the Diocesan authorities. This play “required him to integrate historical episodes with his own mystical view of Christianity” and both with official Church approval (Lindop 293). The Rural Dean would not allow the word “lechery,” so CW had to change it to “Luxury” (Lindop 294). I find myself rather surprised that it had to pass the censors, so to speak, but more surprised that it did. Its explicit depiction of witchcraft, full of invocations, and its negative portrayal of the witch-hunter; its frank discussion of sexuality as expressed by a young working-woman; its extremely high-church, even Roman approach to martyrs and relics; and its political overtones—kudos to the Rural Dean for being cool with all this. Or perhaps he just didn’t understand what it was all about.

And then there are two other rather astonishing pieces of content. One is sexual, the other magical. Or, rather, they are the same thing. Lindop writes:

Moreover, it replicated the Rosicrucian Adeptus Minor initiation of twenty years before, in which Williams had been “raised on the cross of Tiphereth.”

Indeed, CW wrote a letter to the director in which he pointed out and explained the Kabbalistic symbolism to her. Gareth Knight, in The Magical World of the Inklings, writes that pageant plays use many of the same methods as ritual magic, and that Judgement at Chelmsford invokes “archetypal forces” and evokes “place memories.” It is “a form of initiation drama” that “contains the mechanics of a magical evocation of consciousness.”

These should not surprise us by now. And perhaps England had gotten used to CW’s oddities by then. It is very good poetry and quite good drama.

There are places in which the old Gospel is retold in powerful new language: Jerusalem says:

I am the oldest and youngest of all the Sees,
Jerusalem; the body of my Bishop was never shrined
after it was twined on the criss-cross pontifical chair,
and a mitre there of a sharp kind on his head.

And then there are two of my favorite parts. One is a commentary on the difficulties of being a poet:

The Girl-Abbess: Do you like writing poetry?
Udall: It is rather difficult sometimes. One has to work extremely hard at it, even though I am one of the best poets in the kingdom.
The Girl-Abbess [with interest]: Really? I thought it all just… [she waves her hand vaguely] came. Did King David have to work when he wrote the psalms? are they poetry?
Udall: They are, Lady Abbess, and he did. if anyone tells you that poetry comes [he waves his hand as she did] Lady Abbess, tell him—tell him he is an infidel and an unbeliever. Almighty God does not give those things as easily as all that.
The Girl-Abbess: Really? You astonish me, father. The Lady Abbess […] always gave us to understand that that was the way in which she composed her hymns.

And the other is a commentary on what makes Christian art. The priest wonders why the most devout girl in the school isn’t playing Mary Magdalene. Well, explains the director, because she can’t act.

The Confessor: Why couldn’t she have been the Magdalen?
The Producer: She’s a worse actress, Father. She does much better as Sloth. Mary makes a finer show.
The Priest: But she’s not so pious.
The Producer: If piety can’t act, Father, piety ought not to be in a play.

Hear, hear. That’s my new favorite line: If piety can’t act, piety ought not to be in a play. Maybe I’ll make that the new motto for Ekphrasis. It’s a good line for any Christian in the arts to remember. 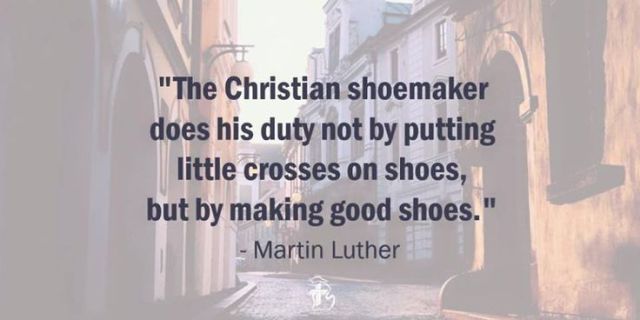 Sørina Higgins is a PhD student in English and Presidential Scholar at Baylor University. She also serves as Chair of the Language and Literature Department at Signum University, online. Her latest publication is an academic essay collection on "The Inklings and King Arthur" (Apocryphile Press, December 2017). Her interests include British Modernism, the Inklings, Arthuriana, theatre, and magic. She holds an M.A. from Middlebury College’s Bread Loaf School of English. Sørina blogs about British poet Charles Williams at The Oddest Inkling, wrote the introduction to a new edition of Williams’s "Taliessin through Logres" (Apocryphile, 2016), and edited Williams’s "The Chapel of the Thorn" (Apocryphile, 2014). As a creative writer, Sørina has published two books of poetry, "The Significance of Swans" (2007) and "Caduceus" (2012).
View all posts by Sørina Higgins →
This entry was posted in Book Summaries, Rosicruciana and tagged book summaries, plays, Rosicruciana, theology. Bookmark the permalink.

23 Responses to CW Was a Socialist? Summary of “Judgement at Chelmsford”