CW Made Something Shorter?! 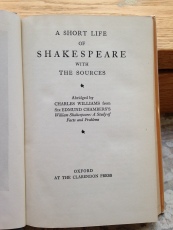 [the numbers are messed up, because I haven’t always blogged books in order. See THE INDEX for a tidy list]

In 1933, Oxford UP’s Clarendon Press commissioned none other than our own Charles Williams to produce what would now probably be entitled Chambers’ Shakespeare for Dummies: a 260-page condensation of the original work. Here is a size comparison of Chambers’ work with Williams’: 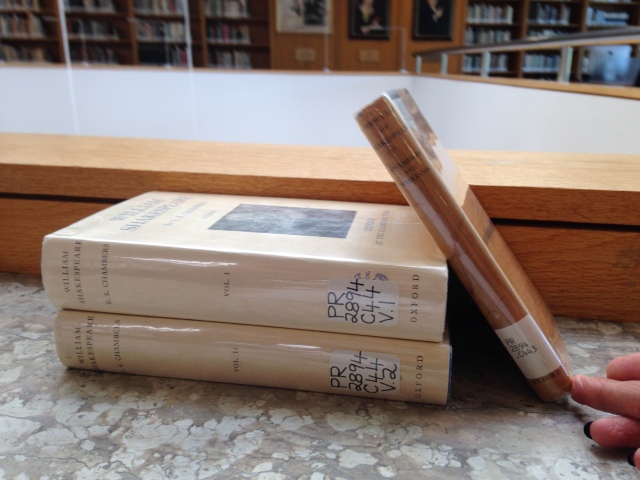 This is unquestionably one of the “pot-boilers” CW often completed as regular duties in his work or as extras to make a little more money. Besides writing a VERY brief introduction (only a page-and-a-bit), it looks as if CW just cut stuff out. It appears to me that he took his copy of Chambers, crossed out everything he didn’t want in his abridgment, and sent that off, saying “Print what’s left.” I did not find any instances in which he even changed a word.

How does he manage to shorten the book so much, then, and what is the purpose of his abridgement?

To take that second question first: What is the purpose of this shortened version? To answer it, here is CW’s introductory “note” in its entirety. 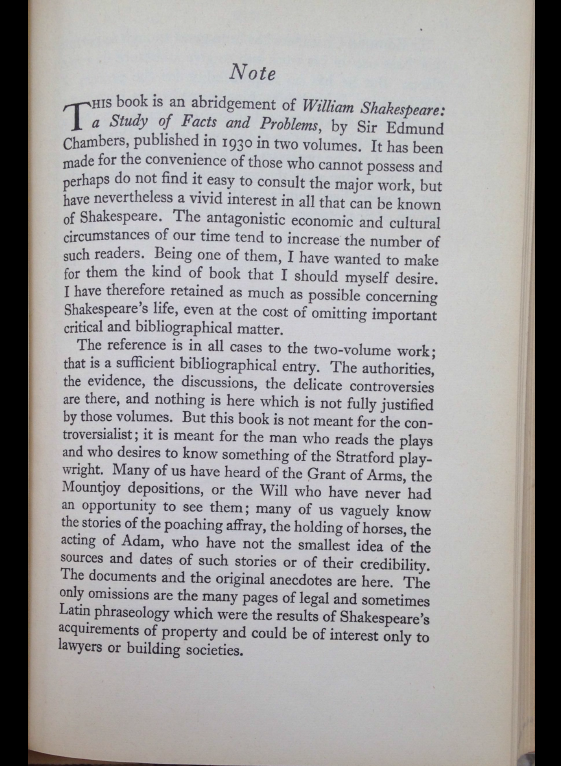 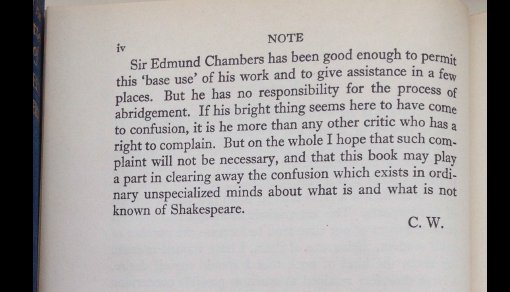 So he has made this book for people who are (a) too poor or (b) too uneducated to own or understand Chambers’ book. He includes the disingenuous claim that he is “one of” such readers. Hogwash. Obviously he had access to a copy at work (whether he could afford to own one privately or not), since he made the abridgement. And obviously his bosses, at any rate, considered him educated enough to understand the original deeply and thoroughly, since they trusted him to abridge it. So I find that false humility actually arrogant and obnoxious, as if he is talking down to all the dumb poor people who don’t “get” Chambers, especially as on the next page he calls this a “base use” of the original material (quotation marks his). That’s insulting, even if the scare quotes are supposed to indicate that he doesn’t really mean it.

Furthermore, if he really wanted to make it accessible to working-class readers, he could have translated the Latin, modernized the spellings, paraphrased the complicated sentences into simpler English, and explained some of the points in lay-people’s terms. Maybe he was not allowed to do so. Maybe his instructions were “Shorten it, without changing a word.” If so, then, I think his introduction could have been more honest. OUP wanted to sell more copies, most likely, and people will buy a little cheap book more readily than a really expensive two-volume scholarly work.

The Oxford University Press digital archives include the following record of the publication of CW’s work in 1933:

Since it is called an abridgment, perhaps it was required to be merely a shortening, not actually a version more accessible to ordinary readers.

There are a couple of other points in CW’s introduction that are not strictly true. He claims that “the authorities, the evidence, the discussions, the delicate controversies are there.” That is simply not true. 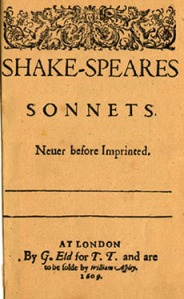 For example, in a discussion of the confusing content of the Sonnets (to whom are they addressed? Are they autobiographical? etc.), Chambers writes: “It has been thought that the work of other men has been intermingled with Shakespeare’s,” and then there follows a page-long discussion of various scholars’ thoughts on the matter. CW retains that sentence, skips the scholarly discussion, and picks up again with “It is impossible, I think, to be dogmatic on the evidence available.” The words “I think,” with their attendant commas, are in Chambers but not in Williams. Indeed, CW often takes out qualifiers, making the claims stronger. But notice what he has left out: the one page that contained precisely “the authorities, the evidence, the discussions, the delicate controversies.” I don’t mind his leaving it out—that makes sense—but I mind his claiming that he didn’t.

He also claims that “the documents and the original anecdotes are here.” But they are not. That is precisely what he has left out, which leads us to the second question: How did he get it down to 260 pages from 1,024?

So that’s how he shortens it.

[How Chambers managed to compile all of that without the internet is beyond me. And the dude published like one major scholarly work every year or so. It boggles the mind.] 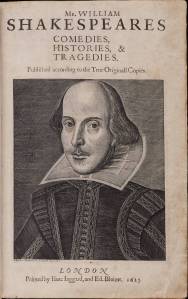 I don’t have any information about sales figures, but The Story of Shakespeare was successful enough to be reprinted in 1946. It’s a nice little volume, but probably fairly outdated by now. Any of you Shakespeare scholars know what the reputation of Chambers’ work is at this point? Has he been superseded? By whom?

Anyway, my biggest surprise was to find that CW ever made anything SHORTER. With his long sentences, lush descriptions, and labyrinthine syntax, I didn’t think he could ever do that. He could and did. Now I want to do the same to many of his works. 🙂

Sørina Higgins is a PhD student in English and Presidential Scholar at Baylor University. She also serves as Chair of the Language and Literature Department at Signum University, online. Her latest publication is an academic essay collection on "The Inklings and King Arthur" (Apocryphile Press, December 2017). Her interests include British Modernism, the Inklings, Arthuriana, theatre, and magic. She holds an M.A. from Middlebury College’s Bread Loaf School of English. Sørina blogs about British poet Charles Williams at The Oddest Inkling, wrote the introduction to a new edition of Williams’s "Taliessin through Logres" (Apocryphile, 2016), and edited Williams’s "The Chapel of the Thorn" (Apocryphile, 2014). As a creative writer, Sørina has published two books of poetry, "The Significance of Swans" (2007) and "Caduceus" (2012).
View all posts by Sørina Higgins →
This entry was posted in Book Summaries and tagged book summaries, literary theory, Oxford University Press, Shakespeare. Bookmark the permalink.

6 Responses to CW Made Something Shorter?!