Charles Williams and Doctor Who, part 1: The Nature of Time

Doctor Who is returning! Season 9 opens this Saturday, September 19th, with the Twelfth Doctor and Clara in their continuing wild adventures.

So what do the Doctor and the Third Inkling have in common? Not just that CW’s friend C.S. Lewis died the same day that Doctor Who premiered—and thus, clearly, the Doctor is Lewis reincarnated. And the series has a mythic quality much like what J.R.R. Tolkien praised in “On Fairy-stories,” as Katherine Sas has argued. Not just that there’s an episode called The Doctor, the Widow, and the Wardrobe that takes place in a snowy forest at Christmas. No, there’s more. There are at least four themes that I’ve found common to both the writings of Charles Williams and Doctor Who. I’m not claiming any direct influence. While it is obvious that Steven Moffat read The Lion, the Witch, and the Wardrobe, and even the BBC has listed five reasons Doctor Who owes C. S. Lewis a debt of gratitude, there is more.

Here are the themes, which I plan to post four days in a row to lead up to the release of Season 9:

Let’s talk about the fluid nature of time.

Obviously, this is one of the biggest themes of Doctor Who. It’s arguably the main premise of the show, at least in the reboot. Especially in the River Song/Amy Pond storyline(s), questions abound about whether time can go backwards, whether time can be rewritten, whether the past can be changed, and what impacts time travel has. While various episodes answer these questions differently (resulting in the endearingly frustrating contradictions the show is [in]famous for), it is perfectly clear that time is not a fixed straight line in the Doctor Who multiverse.

You may be surprised to find that this is also the case in Charles Williams’s universe. But wait, you say, wasn’t Williams a Christian? Yes. And don’t Christians believe that time IS a fixed straight line, running from Creation through Fall and Redemption, ending with the Apocalypse and the New Heavens and the New Earth?
(I feel German there, with all those capitalized nouns).

Well, yes. We do. But it’s also not that simple. Throughout church history, theologians have debated the nature of Time and, especially, God’s relationship to it. Boethius, for example, argued that God is outside of time and sees it “all at once,” as it were. He wrote in The Consolation of Philosophy:

Providence views all things equally and at the same time, despite their diversity and seemingly infinite magnitude. Fate sets individual things in motion once their proper order and form has been established. In other words, Providence is the vision of the divine mind as it sees the unfolding in time of all things, and sees all these things all at once, whereas the unfolding of these events in time, seen as they unfold in time, is called Fate.

So if God is outside of time in some sense, and yet He doesn’t need time to keep everything from happening all at once, then it seems that the closer someone comes to living in God’s perfect will, the more someone’s individual will and perceptions become submersed in God, then the more that person will be able to have a supra-chronological view.

At least that’s how Williams depicted it in his fiction. One of the ways he shows timelessness is to depict historical and contemporary events simultaneously—and even to have the characters aware of one another across time. In Descent into Hell, a worker attempts suicide forty years ago, and an old lady about to die communicates with him. In a crucial passage, our young heroine Pauline wants to help her martyred ancestor John, who was burned at the stake 400 years before. An exchange takes place. Pauline says to her grandmother:

“But how could one give backwards? …. four hundred years,” she exclaimed.
“Child,” her grandmother said, “I can touch Adam with my hand; you aren’t as far off.”
“But how could he take it before I’d given it?” Pauline cried, and Margaret said: “Why do you talk of before? If you give, you give to It, and what does It care about before?”

“It,” in this case, is of course God. It is a remarkably Boethian passage: God does not care about before or after, so that Pauline, in God, is able to give joy to her ancestor across a 400-year gap. That’s a very Whovian move, too.

Maybe I should be making this argument the other way around: that Doctor Who is actually a Boethian parable for modern times. I mean, how about this quote from “Blink”: “People assume that time is a strict progression of cause to effect, but actually from a non-linear, non-subjective viewpoint—it’s more like a big ball of wibbly wobbly… time-y wimey… stuff.”

OK. Boethius would have managed the prose more smoothly. But still. Here’s a better example: a conversation from “The Parting of the Ways”:

Two thousand years in the future is happening now. It’s all happening at exactly this moment, and what we do now happens then, too. That is just what Williams does. Our now is an eternal now; our decisions resonate through all eternity, because that’s when they happen. (Compare this to the vision at the end of The Great Divorce, while you’re at it).

This is not the case only in CW’s fiction, either. He begins his theological work The Descent of the Dove: A History of the Holy Spirit in the Church with this paragraph:

The beginning of Christendom, is, strictly, at a point out of time. A metaphysical trigonometry finds it among the spiritual Secrets, at the meeting of two heavenward lines, one drawn from Bethany along the Ascent of the Messias, the other from Jerusalem against the Descent of the Paraclete. That measurement, the measurement of eternity in operation, of the bright cloud and the rushing wind, is, in effect, theology. 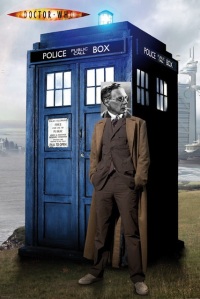 There it is again: a point out of time. He also says somewhere—I think it’s in The Forgiveness of Sins—and I paraphrase, that the Incarnation is so essential to the nature of reality that if it hadn’t happened yet, that would only mean it was yet to happen. It IS the turning point, the meaning, of human history, whether you are looking at it is if it is “before” or “after” your own time.

So if you watch the new season of Doctor Who starting this Saturday, read some CW alongside. You’ll be surprised how their ideas about time are so synchronous—if that’s the right word.

Sørina Higgins is a PhD student in English and Presidential Scholar at Baylor University. She also serves as Chair of the Language and Literature Department at Signum University, online. Her latest publication is an academic essay collection on "The Inklings and King Arthur" (Apocryphile Press, December 2017). Her interests include British Modernism, the Inklings, Arthuriana, theatre, and magic. She holds an M.A. from Middlebury College’s Bread Loaf School of English. Sørina blogs about British poet Charles Williams at The Oddest Inkling, wrote the introduction to a new edition of Williams’s "Taliessin through Logres" (Apocryphile, 2016), and edited Williams’s "The Chapel of the Thorn" (Apocryphile, 2014). As a creative writer, Sørina has published two books of poetry, "The Significance of Swans" (2007) and "Caduceus" (2012).
View all posts by Sørina Higgins →
This entry was posted in Themes and tagged Doctor Who, themes, time. Bookmark the permalink.

17 Responses to Charles Williams and Doctor Who, part 1: The Nature of Time