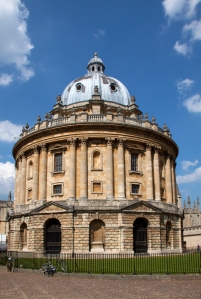 I wrote last week about my lovely morning researching an Arthurian work by Barfield in the Bodleian Library–my personal earthly paradise. Now I would like to share with you about the talk I gave at the Charles Williams Society on the afternoon of that same day, June 6th.

First, let me say what an enormous blessing it was to be hosted by the gracious members of the CW Society and their guests: Brian Horne, Stephen Barber, Richard Sturch, Roger Rowe, Christine Hunter, Malcolm Guite, and Holly Ordway. Their kindness and intelligence made a beautiful combination. I have seen this meeting of good character and good minds in many Inklings-related gatherings: the Taylor Colloquium, the Marion E. Wade Center, MythMoot, and other conferences and assemblies. It is heartening.
My talk consisted of two parts, the first part about The Chapel of the Thorn and the second part about The Inklings and King Arthur. The two parts were tied together by one question: What makes a work “Arthurian”?

Well, of course not. There’s no King Arthur in it. No Knights or Round Table. No Lancelot or Guinevere. No Quest for the Holy Grail. 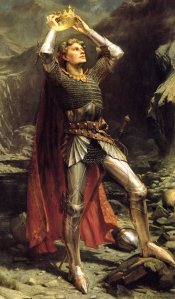 But… there is a Holy Relic. And the play is driven by a Quest to see who will end up controlling this holy relic. So this play does dance with matters on the edge of Arthurian legend: the Crown of Thorns in this play is a kind of metonym for the Holy Grail, which is in its turn a synecdoche for all objects and actions of Christ’s passion, and characters’ responses to these physical items are revelatory of their eternal salvific or damnatory condition. In other words, the Crown of Thorns (or a thorn from the crown) stands in for the Holy Grail in this play, and the Holy Grail stands in for people’s true spiritual condition throughout CW’s writings.

So I talked about that for the first half. (This part of the talk was similar to this one I gave at MythMoot). I explained the plot of Chapel and talked about its major themes. I told the group that the play is performable—and I’m still hoping that someone will want to launch a production (Sharon Gerdes? Joe Ricke? Ron Reed?).

Then I used the discussion about the importance of a “sacred object” in CW’s writing to transition into talk about the upcoming volume The Inklings and King Arthur. I reproduce the current (final?) Table of Contents here:

The Inklings and King Arthur
Table of Contents

Introduction by Sørina Higgins
Texts and Intertexts
1. Arthurian Backgrounds: Medieval to Early Modern by Holly Ordway
2. Houses of Healing: The Idea of Avalon in Inklings Fiction and Poetry by Charles A. Huttar
3. Echoes Beyond Allusion: Intertextuality in C.S. Lewis’ Arthuriana by Brenton Dickieson
Texts in Contexts
4. Spiritual Quest in a Scientific Age by Jason Jewell and Chris Butynskyi
5. Arthurian Waste Lands and Renewal in Lewis and Eliot by Jon Hooper
6. The Stripped Banner: Reading The Fall of Arthur as a Post-World War I Text by Taylor Driggers
7. The Elegiac Fantasy of Past Christendom in J.R.R. Tolkien’s The Fall of Arthur by Cory Grewell
The Myth, the Mind, and the Past
8. “All men live by tales”: Chesterton’s Arthurian Poems by J. Cameron Moore
9. From Myth to History, and Back Again: Arthur as Paradigm for Understanding the Inklings’ View of Mythological History by Yannick Imbert
10. Shape and Direction: Human Consciousness in the Inklings’ Mythological Geographies by Christopher Gaertner
The Topographical Body
11. Mapping the Grammatical Margins of Middle-earth: The Fall of Arthur’s Geography by Robin Anne Reid
12. Camelot Incarnate: Arthurian Vision in the early plays of Charles Williams by Bradley Wells
13. “What does the line along the rivers define?”: Charles Williams’s Arthuriad and the Rhetoric of Empire by Benjamin D. Utter
The Gendered Body
14. In the World Walking for the Woe of Men: Guinever in The Fall of Arthur by Alyssa House-Thomas
15. Those Kings of Lewis’s Logres: Arthurian Figures as Lewisian Genders in That Hideous Strength by Benjamin Shogren
16. Beatrice and Byzantium: Sex and the City in the Works of Charles Williams by Andrew Rasmussen
The Spiritual Body
17. Knights of the Sun: MacDonald’s Chivalric Mentorship in an Arthurian Light by Kirstin Jeffrey Johnson
18. “Any Chalice of Consecrated Wine”: The Significance of the Holy Grail in Charles Williams’ War in Heaven by Suzanne Bray
19. The Acts of Unity: The Eucharistic Theology of Charles Williams’ Arthurian Poetry by Andrew Stout
Conclusion by Malcolm Guite: “ ‘Once and Future’: The Inklings, Arthur, and Prophetic Insight.”

It is difficult for me to reproduce my presentation here, as it was wide-ranging rather than detailed, broad rather than deep. I sort of skimmed over several of the points that the volume makes, some of the approaches it takes, and so forth.

Now, in the lovely plans of Providence, both Holly Ordway (chapter one) and Malcolm Guite (conclusion) were present at this meeting of the CW society. So there was no way I wasn’t going to ask them to share a little about their chapters. And from their words and mine, a few themes coinhered. I would say that the strongest two points that emerged were:

I. The Inklings’ thoughts and writings (including and even especially their Arthurian works) are directly, intimately relevant for the problems, issues, and thoughts of our own day, the early 21st century. Holly talked about the Arthurian “sources” from which the Inklings drew—Gildas, Nennius, Wace, Layamon, the Mabinogion, Geoffrey of Monmouth, Sir Thomas Malory, the prose romances, etc—and how each writer adapted his material to his times. The Inklings did the same, telling tales for their times. But their tales are also for our times, and Malcolm Guite spoke about some very specific points in which they were nearly prophetic. From Lewis, he spoke about (if I remember correctly) how the Head in That Hideous Strength warns us against bioethical violations and transhumanism. From Tolkien, he pointed out that the early environmentalism in The Lord of the Rings has direct applicability to our own thoughtless contributions to climate change. And from Williams, he talked about how the economic principles in the poem “Bors to Elayne: On the King’s Coins” were pointed warnings against the kinds of malpractice that led to our recent banking crisis. I can’t wait to share his completed chapter with you; it will be powerful and influential.

II. Perhaps the most relevant of all their ideas is the power of story, more particularly the power of Myth and Mythic Archetypes. We had a pleasant little debate about whether the classic mythic characters and ethical archetypes are still available to and known by the children of today. Some people there were pessimistic, saying that the loss of a classical education or received literary tradition has stripped today’s young people of these important moral and spiritual icons. Others present, myself included, argued that the archetypes are still there, but instead of being encountered through, say, Greek and Roman literature (or even the traditional Disney fairy tale), they are now present in the superhero genre: the Marvel universe, comic books, graphic novels, and the gaming culture. So they are always present, but they shift genre and medium from one generation to another. 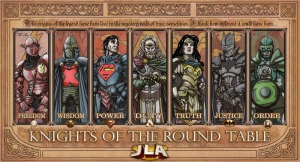 If any of you who were present are reading this, please add more details of our discussion. And other readers, please join in the debate! Do you think the classic mythic moral/ethical archetypes are alive and well in “Western” culture in 2015? Or have they died? Do children have the heroes they need today?

Sørina Higgins is a PhD student in English and Presidential Scholar at Baylor University. She also serves as Chair of the Language and Literature Department at Signum University, online. Her latest publication is an academic essay collection on "The Inklings and King Arthur" (Apocryphile Press, December 2017). Her interests include British Modernism, the Inklings, Arthuriana, theatre, and magic. She holds an M.A. from Middlebury College’s Bread Loaf School of English. Sørina blogs about British poet Charles Williams at The Oddest Inkling, wrote the introduction to a new edition of Williams’s "Taliessin through Logres" (Apocryphile, 2016), and edited Williams’s "The Chapel of the Thorn" (Apocryphile, 2014). As a creative writer, Sørina has published two books of poetry, "The Significance of Swans" (2007) and "Caduceus" (2012).
View all posts by Sørina Higgins →
This entry was posted in Arthuriana, News and tagged Arthuriana, Brenton Dickieson, C.S. Lewis, Chapel of the Thorn, events, Inklings, J.R.R. Tolkien, news. Bookmark the permalink.

8 Responses to Hallows and Heaven