Office Drama: The Masques of Amen House part 2
The Masque of Perusal 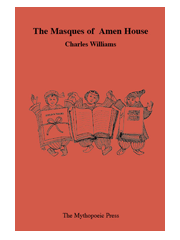 In the 1920s, CW wrote several plays for performance at his workplace, the London offices of Oxford University Press, located at Amen House. Before reading this post, please go back and read an intro to Amen House and my summary of the first play, The Masque of the Manuscript.

Last week I wrote about the first play in this collection, The Masque of the Manuscript. Now here is some discussion of the second play, The Masque of Perusal.

The same characters appear in this play as the first, played by the same people. Each is given a second role, and there is one new character added. Nina Condron had left the Press, so the Book is no longer a character, although it is talked about and represented by a book-prop on the stage.
Tityrus/The Author = Charles Williams
Phillida/shop girl = Phyllis Jones
Dorinda/shop keeper = Helen Peacock
Alexis/shop worker = Gerard Hopkins
Colin/crossword writer = Frederick Page
Thyrsis/The Master of the Music = Hubert Foss
Perigot, the messenger of the gods [casting unknown]
Caesar = Sir Humphrey Milford (again, referred to, but never appearing on stage)
Tityrus = Charles Williams
Phillida = Phyllis Jones
Dorinda = Helen Peacock
Alexis = Gerard Hopkins
Colin = Frederick Page
Thyrsis = Hubert Foss
Caesar = Sir Humphrey Milford

The action begins with The Book rushing into the publishing house, in great distress. She wants to know what purpose her life serves—the question that plagues us all. She wants to know why she has been published and sent out into the world. Isn’t being put out for sale on the public market a kind of prostitution? Yet in her case, no one buys her, no one reads her. And now she is growing old and likely to go out of print soon. Do publishers bring books to life only so that they may die?

I cannot bear it: will you multiply
Labour and books and yet they all must die?

Be pulped then, being still more unwanted. Die.
What man endures, that think’st thou to put by?

But then a customer enters: Thyrsis, the Master of the Music. He is on a quest for the most beautiful words: the longest, most musical, most inspiring words. He buys the Book.

In part two, Thyrsis has read the book. The Book, thus ingested, becomes The Thought, and inspires him to write his own masterpiece.

A Theology of Work

The conflict of the first part is then repeated on a larger scale. The question becomes: Why do you publish? This is Williams facing the existential question of vocation: What is the purpose of this line of work? How does it fit into a grand spiritual scheme? In order to raise the stakes even more, and to point out the spiritual metaphor of this question, The Thought rephrases it: “What serves the Graal?”

This is a very important moment in this play, but easy to miss. After all, what in the world does that mean, “What serves the Graal?”

Well, that is a good question, and it gets at the heart of CW’s sacramental vision. In order to understand this bit about the Graal, a little Arthurian background is necessary.

Around 1180, Chrétien de Troyes wrote his Le Conte du Graal or Perceval—the story of the Grail. You can see that Williams chooses to use the French spelling Graal, perhaps to defamiliarize the Holy Grail for his readers, perhaps to point back at his sources.

In Chrétien’s story, the knight Percival sees a procession in which a bleeding lance, a serving bowl, and silver carving platter are carried past as he sits as a guest in a wounded king’s palace. He thinks he might ask why the lance is bleeding and where the bowl is being carried—but he never does ask. He finds out later that his failure to ask the right questions means that many knights will die and lands will be laid waste. If he had asked, he would have cured the wounded king.

A little later, around 1200, Robert de Boron in his Perceval added that Percival was supposed to ask what the Grail was for and who was served with it. Again, he doesn’t, and has to go on a quest to find the Grail again and ask the right questions.

This tradition, about the question full of power, continues down through the ages of Arthurian legends. CW picks up on this, and purposefully phrases the key question in an ambiguous way. “What serves the Graal?” could mean many things:
* What food or substance is being served in the Grail?
* Who is being served the food or drink that is in the Grail?
* What purpose does the Grail serve in the grand scheme of things?
* What actions can be done in service of the Grail and of its Lord, Jesus?
* Which people have submitted themselves to the Lord’s work so that they serve the Grail?

In the context of The Masque of Perusal, CW uses it to mean: “Whom do you serve by your work of publishing? Are you serving God by how you work?” This play, then, is a part of CW’s theology of work: any task well done for the glory of God is a way of “serving the Graal.”

To further emphasize this, the play builds to a high point in which the characters present a high, holy, hermetic ritual Procession of the Grail:

You hierarchy, whereby man’s best heart,
Communicated to his outward part,
Does in the forms and shapes of time previal,
Lead forth the ritual and expose the Graal.

Colin carries an inkpot, Alexis carries a pen, Dorinda carries type, Phillida carries paper, and The Thought carries periodicals. In the song they sing, they quote from a hermetic source, The Emerald Tablet of Hermes:

As without, ah so within,
As below, ah so above
and indicate what their items signify:
As the Spear is, is the pen
As the Chalice is the ink
…
As the spirit is the type
And the paper as the earth;
Printing, publication, sale:
Lo, the hallows of the Graal.

Any work-a-day objects, then, are sanctified when the workers order their work aright in the grand hierarchy of Heaven.

And that’s The Masque of Perusal! Come back in the next couple of weeks to hear about the rest of The Masques of Amen House.

Sørina Higgins is a PhD student in English and Presidential Scholar at Baylor University. She also serves as Chair of the Language and Literature Department at Signum University, online. Her latest publication is an academic essay collection on "The Inklings and King Arthur" (Apocryphile Press, December 2017). Her interests include British Modernism, the Inklings, Arthuriana, theatre, and magic. She holds an M.A. from Middlebury College’s Bread Loaf School of English. Sørina blogs about British poet Charles Williams at The Oddest Inkling, wrote the introduction to a new edition of Williams’s "Taliessin through Logres" (Apocryphile, 2016), and edited Williams’s "The Chapel of the Thorn" (Apocryphile, 2014). As a creative writer, Sørina has published two books of poetry, "The Significance of Swans" (2007) and "Caduceus" (2012).
View all posts by Sørina Higgins →
This entry was posted in Book Summaries and tagged Amen House, book summaries, Oxford University Press, Phyllis, plays, works. Bookmark the permalink.

1 Response to Office Drama: The Masques of Amen House part 2