Your Wife is Jesus: “Outlines of Romantic Theology,” c. 1924

We’re back to the book summaries! This is the posting of summaries of each of CW’s books, one book per week, in chronological order, that I was doing for a while and then abandoned at the end of January. I plan to pick this up again for a while, then take breaks for other themes and topics, and continue on through his entire corpus. Just hang on six more years, and we’ll start to get to Williams’s more mature works. But meanwhile, today’s book is a fascinating work that is one of his ODDest. 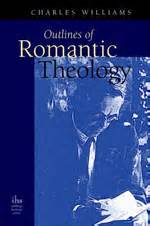 Outlines of Romantic Theology is CW’s first attempt to explicate, in prose, one of his signature concepts: the idea that the “sexual love between and man and a woman…is capable of being assumed into sacramental and transcendental heights” (pp. 7, 9). In the words of this book’s editor, Alice M. Hadfield, Romantic Theology is the belief that “In experiencing romantic love, we experience God” (p. xi).

Williams kept working out the nature and implications of this idea throughout his life; this volume was only the first of many such attempts. It was never published in his lifetime; Hadfield edited and published it after CW’s death. His final statement on Romantic Theology came in one of his last books—accounted his best work by some readers—The Figure of Beatrice (1943). The reader should keep in mind, then, that Outlines of Romantic Theology is an incomplete work, a partial statement, an immature view.

With that caveat, what follows is some attempt to summarize the concepts and contents of Outlines of Romantic Theology with great brevity.

Williams begins Outlines of Romantic Theology somewhat in the middle of things: with his stated assumptions that his peculiar interpretation of love is universal, commonplace, obvious, and orthodox. He says that the suggestions he makes cannot appear to every Christian “as anything but natural and probable” (p. 8) and that “Romantic Theology is part of Christian Theology” (p. 8). This is part of what I find both endearing and perplexing about CW: he always appears to think that his own quirky ideas are mainstream. Some scholars argue, in his defense, that they are, only oddly expressed. Perhaps. Perhaps not.

The definitions of Romantic Theology that I quoted above emerge gradually, worked into the fabric of his introductory remarks about Christian Theology in general. This contributes to the idea that he thinks his interpretation is commonplace, and also makes it difficult to determine exactly what Romantic Theology is.

In the second chapter, CW discusses the “principles” of Romantic Theology, which goes a great distance towards defining it. He begins: “The principles of Romantic Theology can be reduced to a single formula: which is, the identification of love with Jesus Christ, and of marriage with His life.”

What do you think of that? Let me slow it down a bit:

I. Love equals Jesus Christ. Throughout this little book, CW insists that this equation is exact, definite, and literal. It is not a metaphor; love is not “like” Jesus; we are not “like” Jesus when we love someone (well, we are, of course, but that’s not what he’s talking about here). The love between a man and a woman IS JESUS. I think it would be accurate to say that when we are in love, that is one of the many ways that we experience God’s love—but that is to reduce and to sanitize the wildness of CW’s teaching. It does mean that, certainly, but it means more. It is half of a mantra that CW would use frequently in his later writings: “This is Thou, this also is not Thou.” He believed that we had to say that to God about everything.

When we are smashed by tragedy, we have to say of the tragedy: This is God (i.e., God has sent this, it is under His control, He is manifested to me through it—but again, that simplifies and domesticates CW’s more feral diction). But we also have to say of the tragedy: This is not God (i.e., this is because of sin and the fall of humanity, God does not want me to suffer, God has a plan in place to save me from my suffering ultimately, and so forth). We always have to say both of any object, person, experience, event, etc.

So it is with romantic love. When I look at my Beloved, I need to say: he is God (in the sense that God is revealing His divine love to me through this man’s love), and I need to say: he is not God (he is a created being, he is a sinner, etc.). Of the love-experience itself—the whole course from falling in love through marriage until death—I need to say: this is God (I know God through it) and this is not God (I must not idolize this experience or have false assumptions about its blissful continuity).

On to the next point in that quote above:

CW means this quite literally. He means that each love-affair (yes—I chose those words deliberately, and will come back to that) follows the narrative pattern of Jesus’ life on earth. He lists ten moments in the life of Christ and tentatively suggests how they might match up to the events of a romantic relationship. He is absolutely adamant, however, that we must not force these identifications too far: it is dangerous to try to determine which stage my marriage has reached at any given moment. I offer these points here, then, much more schematically than CW would like (with apologies):

Now I really have done a disservice to this book by using up more than my usual word allotment and only talking about the first two chapters. Yet it is essential to understand the principles CW lays down in this unusual little book. I encourage you to get a copy of this slim volume and evaluate it for yourself. And keep in mind, again, that this is his early statement on the topic; for his final thoughts, we’ll have to wait 20 years (or at least 20 blog posts) for The Figure of Beatrice.

Sørina Higgins is Editor-in-Chief of the Signum University Press. She holds a Ph.D. in English from Baylor University. Dr. Higgins is currently co-editing a volume on the ethical turn in speculative fiction with Dr. Brenton Dickieson and previously edited an academic essay collection entitled The Inklings and King Arthur. She is also the author of the blog The Oddest Inkling, devoted to a systematic study of Charles Williams’ works. As a creative writer, Sørina has a volume of short stories, A Handful of Hazelnuts, forthcoming from Signum’s own press. Outside of academia, Sørina enjoys practicing yoga, playing with her cats, cooking, baking, podcasting, gardening, dancing, and ranting about the state of the world.
View all posts by Sørina Higgins →
This entry was posted in Book Summaries and tagged book summaries, love, Romantic Theology, theology. Bookmark the permalink.

6 Responses to Your Wife is Jesus: “Outlines of Romantic Theology,” c. 1924