Sources for CW and the FRC

This is the third post in a series about Charles Williams and the Fellowship of the Rosy Cross. You can access the others here and here.

Here are the top sources that I can recommend for learning more about A.E. Waite, the Fellowship of the Rosy Cross, and Charles Williams’ involvement in this occult group. I have not read every one of them all the way through yet, so if you would like to add a description of one, please send that to me. Also, please leave me comments with other recommendations; I will add some of them to this list if they contain enough material. 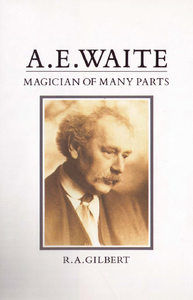 1. Gilbert, R. A. A. E. Waite: Magician of Many Parts. Bath, UK: Crucible, 1987. This book is a disorganized, non-chronological, confusing biography of A.E. Waite (Williams’s occult mentor). But it’s the only bio of Waite I know about, and has an essential chapter on Williams and Waite.

2. Gilbert, R.A. The Golden Dawn: Twilight of the Magicians (1983), the first book with accurate details about C.W.’s FRC membership.

3. Gauntlett, Edward. “Charles Williams and Magic.” This is a startling talk that suggests great heights and depths of magical influence and material in CW’s work, and even goes so far as to hint that perhaps CW was involved in more than one magical society, perhaps even the Order of the Golden Dawn itself, and may have dealt directly and personally with W.B. Yeats. Gauntlett has done other work on this subject, and I encourage you to investigate his writings if you are interested in this subject.

4. Gauntlett, Edward, thesis on C.W. and the FRC: I am not sure if this is the same as the “scholarly study” listed in the catalog of the CW Society’s papers as “Frater Qui Sitit Veniat: Charles Williams and the Secret Tradition.”

5. Brewer, Elisabeth. “Charles Williams and Arthur Edward Waite.” Seven vol. 4 (1983). 54-67. This is an academic article published in the journal of the Marion E. Wade center. You can backorder this issue here. It is a careful study of which books by Waite CW read and where their influences can be seen.

6. Ashenden, Gavin. Charles Williams: Alchemy and Integration. Kent State University Press, 2007. This book focuses on the long history of hermeticism, especially alchemy as a spiritual practice, then relates this information to Williams. It is learned and comprehensive.

7. Dunning, Stephen M. The Crisis and the Quest: A Kierkegaardian Reading of Charles Williams. Waynesboro, GA: Paternoster Press, 2000. This book quite obviously originated as a dissertation, and is sometimes a bit forced in its comparisons of Williams and Kierkegaard. However, it is an intelligent philosophical study of one of the most important themes in Williams’s writing: his use of a particular “Crisis of Schism” as a form of literary theory. Dunning’s argument turns on a Kierkegaardian distinction between religions of Transcendence (in which God is separate from His creation) and Immanence (in which God dwells in people to some extent): Christianity, so Kierkegaard believed, must be only the former; occult religions are the latter, and to the extent that Williams was an occultist, so far his beliefs were contrary to Christian truth. It has an excellent appendix on Williams and Waite.

8. Newman, Barbara. “Charles Williams and the Companions of the Co-inherence.” Spiritus: A Journal of Christian Spirituality, Volume 9, Number 1, Spring 2009, pp. 1-26. This is an academic article about the order that CW founded later in his life, pointing out its occult features.

10. Knight, Gareth. The Magical World of the Inklings. Element, Shaftesbury, 1990 (there is also a new and expanded edition published in 2010). Knight is himself an initiate in an occult society and thus writes with an insider’s insight. He has written many books on occult subjects, several related to the Inklings, so there is more to read here as well.

11. Lang-Sims, Lois. Letters to Lalage. KSUP, Kent, Ohio, 1989. These are the letters that CW wrote to a young woman during his Oxford years, along with commentary she wrote later. They contain accounts of his strange treatment of her, including apparently tantric exercises, the use of a pentagram ritual, and his subsuming of her personality into a role in his myth.

12. Ridler, Anne. Introduction to The Image of the City. OUP, London 1958. This is one of the best introductions to CW from any point of view, and includes useful discussions of his occult involvement.

13. Willard, Thomas. “Acts of the Companions: A. E. Waite’s Fellowship and the Novels of Charles Williams.” A similar topic to Ed Gauntlet’s talk, above, but with more focus on the novels’ content and less on the details of power struggles among secret societies.

14. King, Roma A. Jr. The Pattern in the Web: The Mythical Poetry of Charles Williams. Kent State University Press, 1900. This excellent poetic study has a very helpful section on Williams and the Rosy Cross.

15. David Dodd’s entry in the Dictionary of Literary Biography.

16. IMPORTANT ADDITION: Aren Roukema, “A Veil that Reveals: Charles Williams and the Fellowship of the Rosy Cross” in The Journal of Inklings Studies Vol 5, No 1, April 2015. Roukema gained access to the documents of the F.R.C. and reveals deep connections between its rituals and CW’s novels.

Sørina Higgins is a PhD student in English and Presidential Scholar at Baylor University. She also serves as Chair of the Language and Literature Department at Signum University, online. Her latest publication is an academic essay collection on "The Inklings and King Arthur" (Apocryphile Press, December 2017). Her interests include British Modernism, the Inklings, Arthuriana, theatre, and magic. She holds an M.A. from Middlebury College’s Bread Loaf School of English. Sørina blogs about British poet Charles Williams at The Oddest Inkling, wrote the introduction to a new edition of Williams’s "Taliessin through Logres" (Apocryphile, 2016), and edited Williams’s "The Chapel of the Thorn" (Apocryphile, 2014). As a creative writer, Sørina has published two books of poetry, "The Significance of Swans" (2007) and "Caduceus" (2012).
View all posts by Sørina Higgins →
This entry was posted in Bibliography, Rosicruciana and tagged A. E. Waite, bibliography, mysticism, Rosicruciana, Rosy Cross. Bookmark the permalink.

7 Responses to Sources for CW and the FRC